Thanks so much for getting involved in the blog and posting your questions!  You can now subscribe to get blog posts delivered right to your inbox by filling in your email address in the box on the right. I read a comment from someone earlier this week asking for help on accented syllables and I thought that would be a great topic for today’s post.

Identifying accented syllables is a finer point of language, so it should be addressed only after students have mastered phonics.  In fact, Phonics First only addresses stressed and unstressed syllables when discussing the schwa syllable type.  Delving deeply into accents could be the focus of a college linguistics course, so here I will just introduce some basic information, strategies and rules.

Accent is also known as stress; in English we stress one syllable more than the others when we pronounce a word.  Basically, this means that we say it louder than the other syllables.  A key point is that accent has to do with how the vowel sounds.  An accented syllable will fully pronounce the vowel sound, while unaccented syllables have less emphasized vowels and possibly even the schwa sound. 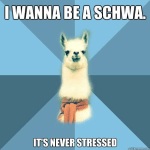 Schwa /ə/ is the sound an unaccented vowel can make that sounds like short u or “uh”.  Think of the sound at the end of “banana,” the beginning of “about,” or the middle of “Japan.”

Take the word “cancel” for example.  Try saying the word twice, stressing the first syllable and then the second.  Which one sounded right?

You probably figured out that the first way (can’ cel) is correct.

Try it out with the words “pencil” and “button.”

The key to using this strategy is to say the word naturally.  It may even help to use it in a sentence.  You should have felt the accent in the first syllable of both words: pen’ cil, but’ ton.

When these strategies aren’t enough, have the student look up the word in the dictionary to find the accented syllable and give the proper pronunciation.

As I mentioned, identifying the accented syllable is one of the finer points of language and should only be addressed once students have mastered phonics.  When students reach this level it may be appropriate to teach them some more in-depth, sophisticated aspects of language, including some of these basic rules/guidelines for stressed syllables.

This involves knowing some Greek and Latin roots because they are the stems (or roots) of many words.  A root word is different than a base word.  A root word is the part of the word that gives the basic meaning; it does not have to be a word on its own: duct, tract, ject, etc.  A base word is a word that a prefix or suffix have been added to.  Base words are words on their own: dog, jump, sell, etc.

If you’re interested, you can find many more rules online.  When I’m working with a student, my goal is for them to read and recognize a word.  I don’t worry much about having them identify the accent.  The accent is mostly about pronunciation.  If a student has decoded the word, done syllabication and read it correctly, the accent becomes an afterthought, something that might be interesting to discuss, but not necessary in most cases.

Was this helpful for you?  Let me know in the comments below!

What other topics would you like to see on the blog?