When someone says, “She has the neatest handwriting,” what are they really saying? What is it about someone’s writing that makes it so neat? Good writing, whether it be print or cursive, can be narrowed down to three simple things: size, slant, and spacing. 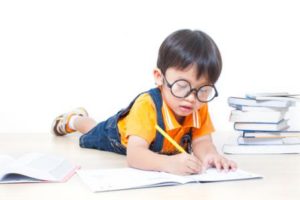 Uniform size is one of the three factors that contribute to neat writing. The size of each letter should be the same from one word to the next and from one line to the next. All of the ascender letters – those that go above the x-line, such as b, d, f, h, k, l, and t – should reach the same height. There should be uniformity in the descender letters as well. Those descender letters – the ones that go below the baseline such as g, j, p, q, and y – should all plunge to the same depth. All letters, whether they be ascenders, descenders, or x-line letters, should have similar width as well as similar height, and sizing should remain consistent through an entire document.

Lovely handwriting has letters that are uniform in slant. The direction of the slant does not matter, as long as it is consistent. Many people find it easier to write with a slight slant to the right, while others prefer a more straight-up-and-down style of writing, and still others prefer a slant to the left. As with size, the slant of beautiful writing should be consistent from word to word and line to line. The slant of each and every letter should be the same. If an N has a 15-degree slant to the right, then the Y, B, and Z should all have the same 15-degree slant.  Letters that have a crossbar, such as f and t (and for some people z), should have consistent size and slant of the crossbars. Too much slant often makes writing look over-crowded.

So, as you can see…producing good handwriting is as simple as 1, 2, 3!