Sometimes students (and teachers) have days where energy is low and they need something fun and different to liven up their phonics lessons. A good time to add in something new and exciting is during the Vowel or Skill Intensive.

Try these activities to pep up  your students and keep them engaged in the lesson.  All you will need is a pom-pom ball and some cups!

Like a standard Vowel Intensive, pick two vowel sounds your student is having difficulty with (“ung” and “ong” in this case). Instead of holding up a vowel stick or making a gesture for the sound they hear in words, have them flick the pom-pom ball at the correct card. 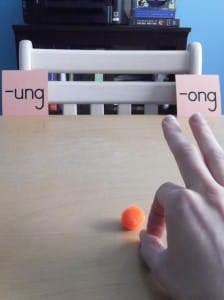 So simple, but so much fun. Students aren’t usually asked to flick objects in school or during tutoring (in fact, they usually get in trouble for doing it), so this is a great treat for them! It also helps them focus on hand-eye coordination and motor skills.

Since it’s difficult to be very accurate when flicking a pom-pom ball some other multisensory ideas involve students tossing the pom-pom ball in a small cup.

Set up cups with each of the blends labeled on them.  The student has to toss the pom-pom ball into the cup with the blend that matches a word you say. 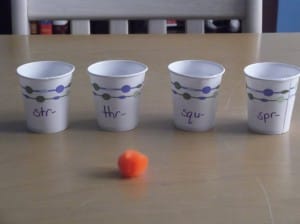 Or try this version with partners:  have the first student draw a slip of paper with a blend word on it.  They read the word and then see if they can toss the ball into the proper cup.  If they make it in the cup, they get a point.  If they don’t make it, they have to try again on their next turn.  Either way, it’s the next player’s turn.  Players can only draw a new card once they have tossed the ball into the proper cup.  The player with the most points at the end wins.

IDEAS FOR OTHER SKILLS

This game will work for many lessons, not just Three-Letter Blends.  Try any of the blends lessons, ng or nk endings, the Wild Old Words or C-le endings. You could even try it with other skills such as parts of speech or syllable types! 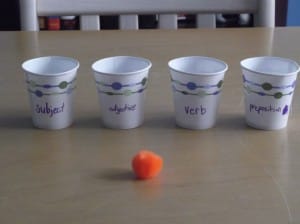 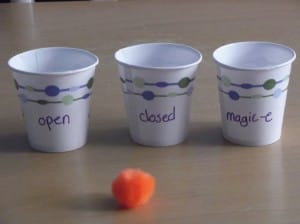