Earlier this week, a teacher emailed me with a fantastic question her students had brought up. After reading it, I couldn’t believe that I had never paid much attention to this myself. (Don’t you just love how observant kids are? They keep me on my toes, and I am so grateful they do!)

Before I share the question though, I’d like to repost an article from earlier this year: Dyslexia Specialist Training – An Educator’s Guide. For those of you who are here from the Spotlight on Dyslexia Conference or anyone who hasn’t read it before, it’s an important read on the importance of finding an accredited program for training or a certified dyslexia specialist. New readers, you can also subscribe in the email box to the right!

…Now back to our regularly scheduled question:

The answer to this question has two parts: 1) the general rule for doubling the medial consonant; 2) doubling to protect the short vowel sound. 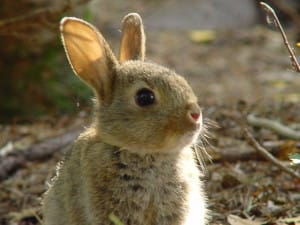 The “Rabbit Rule” is a commonly taught spelling rule that addresses the double consonant in words like “rabbit” and “kitten”. There are many exceptions to this rule, however. I prefer to teach it as a generalization rather than a rule. As we know, there are exceptions to most every rule, especially in English, but I find this one has so many exceptions that I don’t feel comfortable telling my students that it’s a rule. Instead, I explain to them that this is a guideline that will work pretty well most of the time but that they will also find quite a few times when it doesn’t work.

The Rabbit Generalization says that if a base word has two syllables, the vowel in the first syllable is short and there is only one consonant sound between the vowels, then the medial consonant is doubled.

To put it another way, the middle consonant is usually doubled in words that meet these three criteria:

This helps explain the double consonant in many common words, such as rabbit, tennis, letter, muffin, rubber, supper, traffic, ladder, better and carrot.

Here is the catch: this generalization mostly works for words that have come from the Germanic origins of the English language. Many other words have or do not have double letters based on their etymology, the form of the word the originated from. I don’t get into this too deeply with students but occasionally we will look up the etymology of certain words to gain an understanding of where their spellings came from. This blog post has more information on how etymology can have an effect on the doubling of letters.

Doubling to Protect the Vowel

Now for the second part: consonants are double to  “protect” the short vowel for words ending in consonant+le or consonant+y. Think of words like “apple” and “happy”. Double letters are added in these cases because consonant+le and consonant+y endings are syllables on  their own. The syllable division for apple would be a closed syllable and a consonant+le syllable: ap     ple.

Without the double consonants the first syllable would be left open and the word would have a long a sound: a    ple

Keep the questions coming! I’m hoping to be able to share more questions and answers in the future.