Is there something more to “messy handwriting”?

As teachers, parents, and educators, we’ve all encountered a child with sloppy handwriting. Sometimes we are quick to judge the child as being lazy, messy, or simply rushing through an assignment. While that may be the case in some situations, a child with consistently messy writing may have a condition called Dysgraphia.

What is Dysgraphia? Dysgraphia is a common term used to describe a language processing disorder that coincides with difficulty in fine-motor skills. The word dysgraphia means “difficult” (dys) “writing” (graph).   Unfortunately, there is no cure or quick fix. Dysgraphia tends to be familial and occurs slightly more often in males than females. People may be born with it or may acquire it after a traumatic brain injury.  Although dysgraphia may occur alone, it most often occurs alongside other disorders such as Dyslexia, ADHD, Autism Spectrum Disorder, or other language impairments. It may also occur in people with above-average IQs.

Only a licensed psychologist or a medical professional can diagnose Dysgraphia. In addition to studying writing samples of the child, the examiner will likely evaluate the child’s IQ, design copying skills, spelling and grammar skills, and fine motor development before issuing an official diagnosis. It is important to note that the term Dysgraphia does not appear in The Diagnostic and Statistical Manual of Mental Disorders-5 (DSM-5); Instead, the examiner may state that the child has “an impairment in written expression” which will allow the student to qualify for special services at school under the Individuals with Disabilities Education Act (IDEA).

Although some students with Dysgraphia can print neatly, it is often very laborious and painful for them. Students are often criticized for not trying their best and are labeled as lazy or careless because of their inconsistent and messy writing style. This often leads to students developing low self-esteem. Dysgraphic students often have difficulty taking notes in class because they cannot write as quickly or as neatly as their peers. These students often feel a sense of frustration, embarrassment, or defeat. 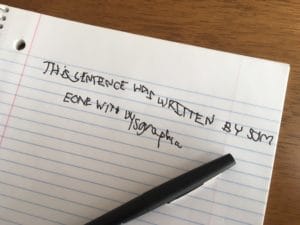 Symptoms of Dysgraphia may include the following:

Dysgraphia is more than just messy handwriting. It is a specific language impairment that, when diagnosed properly, will allow students to receive remediation and accommodation in school.