A heartwarming story from Brainspring Master Instructor, Tammi Brandon. Grab the tissue folks, this one’s a real tear-jerker! Happy Teacher Appreciation Week from us to you!

And then…there was that unusual gift from Mikey*. 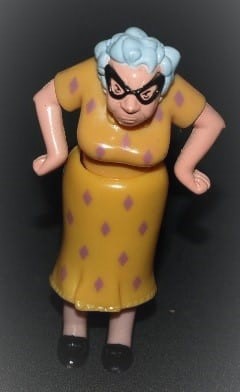 The next morning at school, Mikey bounded over to my desk and inquired about where Ms. Finster was. I assured him that she was fine and comfortable at my home. He sighed a visible sigh of relief knowing that Ms. Finster was safe. The next day, Miss Finster again took a ride in the cup holder of my car, and when Mikey walked in that morning, he lit up as soon as he saw Ms. Finster standing on the corner of my desk.

From That Day Forward …

… Ms. Finster stood at attention on my desk. Every so often, Mikey would walk by and press the kicking lever or gently touch the little action figure.  On the last day of school, Ms. Finster again rode as a passenger in my car. She spent the next few years on the mantle of my fireplace, causing me to pause and wonder how Mikey was doing. Ms. Finster eventually found herself packed away in a memory box. In that box are some old family photos, my travel souvenirs, a book of old war ration coupons that belonged to my great-grandfather, my high school diploma…and Ms. Finster, the kicking action figure. I still think of Mikey often and hope that he overcame the obstacles he faced, and I hope he somehow knows that Ms. Finster is still safe with me.