R controlled vowels (ie “Bossy R”) can be practiced with this Thaumatrope activity, which is a fun DIY toy and optical illusion that can be used to accompany a lesson with Bossy R sound /ir/.

A Thaumatrope is a toy that was popular in the 19th century. The word originates from the Ancient Greek word for “wonder” (thavma, θαῦμα) and turns (tropos, τρόπος), roughly translating to “wonder turner”. And I think it really will leave students in wonder as they see two images becoming one!

The toy has two images, one on either side that morphs into one as it turns- creating an optical illusion of a bird inside a cage. 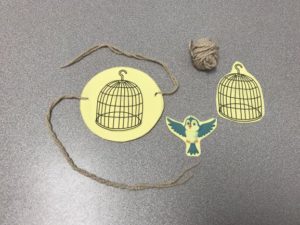