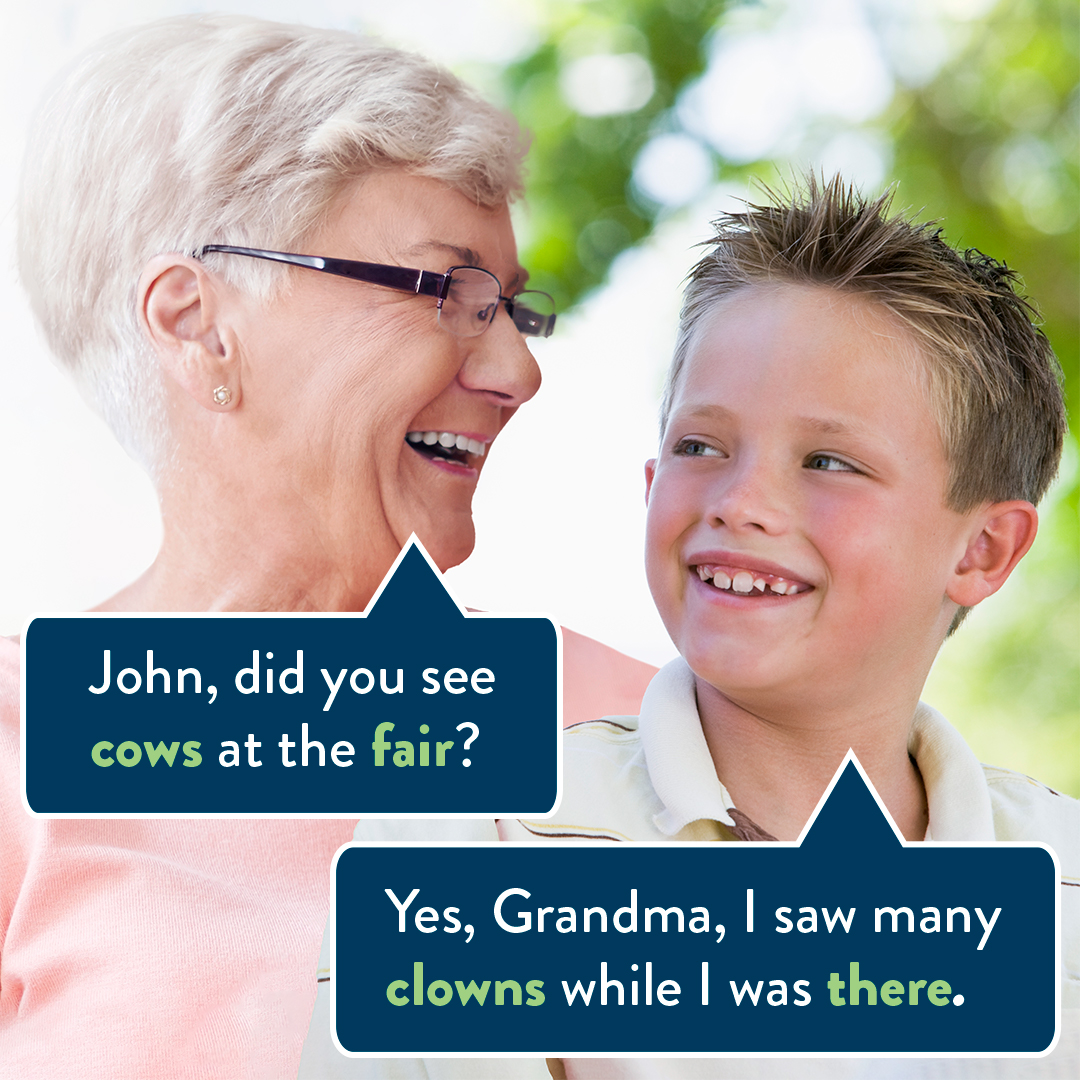 Is the conversation in the image above familiar to you? Maybe you have a child, student, or loved one who communicates like this? Are the words “huh” or “what” a daily occurrence when speaking?

In the above dialogue, John confused these two-word pairs: cows & clowns and fair & there. Both of these word sets have small sound differences. However, if a person has Auditory Processing Disorder (APD), their inability to block out background noise, like a running heating vent, would prevent them from understanding the sounds and words needed for accurate communication.

According to the National Institutes of Health, 43% of children tested for learning challenges have APD, also referred to as Central Auditory Process Disorder ((C)APD). Interestingly, approximately 25% of those who have (C)APD also have dyslexia. While (C)APD and dyslexia share many commonalities, they are still two different disorders that are evaluated differently.

Dyslexia, a language-based learning disability, involves inaccurate and/or non-fluent reading/decoding skills and poor spelling/writing. It is a disability that affects higher-order language components (e.g., inferencing, figurative language, word relationships) which break down the wording, but not the sound.

(C)APD, on the other hand, is how quickly and accurately the brain can process sounds and language. Like dyslexia, (C)APD has no relation to one’s intellectual ability; furthermore, it is not a hearing issue either.

To simplify, people with (C)APD have trouble processing the spoken language correctly, whereas those who have dyslexia struggle with manipulating sounds in order to read and write printed language.

(C)APD has remained controversial due to the overlapping of other disabilities and learning challenges such as Attention Deficit Disorder (ADD), receptive language disorder, working memory, phonological awareness, and dyslexia. Additionally, this disorder can be challenging to diagnose due to the prevalence of patients with comorbidities, meaning they could have, both dyslexia and (C)APD, occurring simultaneously.

Once an audiologist rules out hearing issues, more testing is done to diagnose (C)APD. A wide variety of tests can be used to diagnose dyslexia. Depending on what state you live in, getting a dyslexia diagnosis can be a complicated process to navigate. Any clinician claiming to be qualified to diagnose dyslexia should minimally hold a graduate-level degree in education, medical, neuropsychology, psychology, or speech pathology. They should also have clinical training in both the reading and writing of science as well as experience with administering tests and measurements based on IDA’s criteria.

My Perspective as a Parent

Our daughters struggled in their language acquisition. Within a couple of years, the characteristics of dyslexia were evident, and so, for two years, they consistently received Orton-Gillingham intervention. Because I utilized Brainspring’s Phonic First® program, both their decoding and encoding skills were on grade level, and their phonological awareness issues were addressed using Dr. David Kilpatrick’s Equipped for Reading Success.

But, remember John? The boy who told his grandmother about the clowns he saw at the fair?

Well, this conversation was a frequent occurrence in our household—no matter how much we enunciated. Here were some of the red flags that led us to testing for (C)APD:

Both of our girls were evaluated by an audiologist who specialized in (C)APD; the testing confirmed that (C)APD was contributing to their communication struggles. After a year of Hearbuilder, both were reevaluated. Each one had improved significantly when the testing was administered once again by the audiologist. In school, 504s were administered, along with a FM system, front row seating, directions were written down in sequential steps, and a quiet space to work.

In conclusion, it is imperative to make sure a child is receiving the correct intervention. Different skills need to be taught based on whether a child has dyslexia, auditory processing issues, or both. Typically, a speech-language pathologist would be one who could provide a (C)APD intervention such as Fast Forward or Earobics. If a child is not successful in school, be sure and rule out auditory processing concerns.

Jennifer is a Structured Literacy Specialist, K-12 in Mexico, Maine.