Many students struggle with understanding the sounds of  “Y”. Here is a cute story to introduce your students to the many sounds of “Y”! 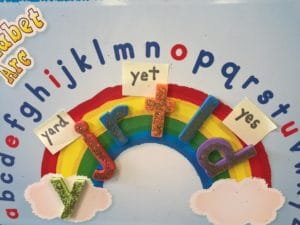 Rainbow City Presents: The Story of Y as a Chameleon

It’s a very exciting time in Rainbow City. All of the letters are graduating from Alphabet High School. They will soon take their place on the alphabet arc that stretches over the city, and join the other letters who drop down to make words.

To prepare for their place in words, every letter that graduates from Alphabet High School has to decide whether to be a consonant or a vowel. Every letter knew exactly what they were going to choose except letter Y.

You see, letter Y loved spending time with his consonant friends. When they were playing word building games, they always let him go first.  Letter Y also loved spending time with his vowel friends. He was given many important vowel jobs. He could be by himself at the end of one syllable words and sing out his long name/i/ in words like “my, try, fly.” The other vowels also let him jump on the ends of their words as an added syllable, like in “penny, baby, happy.” Occasionally, he would jump in between two consonant letters, like in “hymn and gym.”

Y just could not make a choice. He loved being a consonant and he loved being a vowel. This made him so confused.  Y went for a long walk to clear his head and think about his big decision. As he was walking along, he came upon a chameleon crossing the road in front of him. The chameleon jumped on a tree and disappeared. When Y went over to see where the chameleon had gone, he could not see him. All of a sudden, Y saw the grass under the tree move. He caught a quick glimpse of the chameleon in the grass, but then the chameleon vanished again!

Y looked all around the tree and asked, “Where did you go?”

“How did you do that?” Y asked the chameleon.

On the way back to Rainbow City, Y kept thinking about the chameleon. How amazing it would be to change into anything you want to be!   Ah-Ha!!! Y got a brilliant idea! He had a super,  incredible,  wonderful idea….

”I want to be a chameleon!” Now, I can be a consonant and a vowel.

It was finally graduation day in Rainbow City. Y told all his consonant and vowel friends what he decided to do. This made all the letters very happy. Now, they could all take their places on the alphabet arc and drop down into thousands and thousands of words!

Samantha Brooks is an Intern Instructor with Brainspring Educator Academy.

For more information on Brainspring Educator Academy, visit us at http://brainspring.com/.